Thank you for your patience while we retrieve your images.

Howler Monkeys chatting amongst themselves amidst the squawks of scarlet Macaws and Toucans nesting in nearby trees woke me with a start. I was staring at the underside of a corrugated metal roof in a ramshackle wooden hut, deep in the rainforest of the Osa Peninsula - one of the most remote areas of Costa Rica.

There’s no call for windows in the jungle. Only netting separated me from 2.5% of the world’s biodiversity and it was hard to take it all in. I didn’t get much sleep for the first few days in the rainforest.

As night falls, the jungle and its inhabitants carry on chattering regardless. The excitement, intensity and constant hum of the rainforest is captivating with glass frogs and toads providing the chorus to a symphony of crickets and owls.

I was met in San Jose by my aptly named guide ’Jose’ who is a goldmine of information, when it comes to the ecology of the forest and understanding of the Costa Rican culture. I continued the journey in a cosy, single engine Cessna prop plane to Palmar Sur – following the Pacific coast line, a lush undulating carpet of vegetation blanketing the landscape as far as the eye could see.

Silver, snaking rivers glistening in the midday sunlight, led my eye to the Pacific Ocean where the all-important mangrove swamps provide the rich ecosystems, as freshwater meets the sea.

The lack of development is evident from the air. Small buildings appear and then disappear in a blink of an eye, with very few town conurbations on the horizon as we navigated the coastline into the national park. Costa Rica contains six per cent of the world’s animal and plant species and is at the forefront of ecotourism.

Hiking through the jungle to our first port of call, I barely had time to adjust my backpack before the wildlife inquisitively peered down at me from the trees above. A group of squirrel monkeys began bouncing through the air over our heads, playfully sparring with one another.
These are the smallest and most playful of the four species of primates found in Costa Rica and also the most endangered.

I find it hard to stop photographing the curious bunch but I’m assured that the wildlife here is not difficult to find. ‘It’s only the first day,’ I’m frequently reminded as I reluctantly holster my SLR.

I’m led through the grounds of the Finca museum displaying Pre-Columbian (before the Western discovery of the Americas) artefacts and the mysterious, perfectly carved stone Spheres, with artefacts buried besides them, dating back to between 300 BC (having recently been granted UNESCO world heritage status).

Discovered in the 1930s by the United Fruit Company, many of the spheres were destroyed, with people mistakenly thinking that they were full of gold.

The many years of exhausting the soil’s nutrients and mining for gold, along with the use of pesticides and hunting, have seen ‘Not for Profit’ groups like Osa Conservation try and reverse the decline in forestation to protect the ecosystems of the Osa Peninsula.

Juan Carlos Cruz Diaz heads up the Osa conservation wildcat study. His remote cameras have been able to track down the much sought-after Jaguar, currently at their lowest population in 30 years.

By gathering donations and funding, they have set up a system to photograph the wildlife throughout the Corcovado national park, setting up their cameras in over 3,000 hectares of land. The aim is to understand the habitat and the movement of wildcats, in an effort to reduce hunting, mining and over-farming, which could see this precious species disappear.

Christopher Columbus famously arrived on the shoreline in 1502 and returned with tales of natives adorned with golden jewellery, spurring on the Spanish conquistadors who colonised Costa Rica in 1524.


It hasn’t changed much in recent years – there was a mining boom in the 1930s and large multinational corporations were allowed to mine during the ‘70s and ‘80s in the Osa peninsula. The firms granted licenses to mine have been under fire for threatening local plant and animal life when extracting the gold.

However, mining has generally been banned throughout Costa Rica, with a few exceptions where the government attempt to regulate it. That raises the question about what to do when you have one of the most important ecosystems in the world, sitting on top of gold reserves potentially more valuable than Fort Knox!

It is surmised that 80% of the world’s gold has yet to be found which makes the ban of mining in Costa Rica, a hard nugget to swallow for the local town-folk. Over the last few decades, they’ve seen the corporations come and go with wealthy prospectors grabbing gold nuggets as big as their fists from the barrels of the bulldozers and jumping back on planes to cash in on their spoils.

It doesn’t come as a much of a surprise that even though gold mining is not strictly legal, it continues on a very small scale with locals picking up a shovel and wandering into the rivers running through the national parks to earn a living.

There have been efforts to change the culture of mining in towns surrounding the national parks to protect the Rainforest, but also to protect the local town’s people who have seen generations of miners.


On the Camino del Oro (Trail of Gold).

I hike five kilometres into the jungle to Finca El Descansol Lodge, a home-stay with Freddy and Jensi Rosales. There, they give me a much- needed meal to re-fuel me.

‘I hope you like black beans, rice and Plantain as it comes with each meal of the day!’ Jose says with a grin, of the ‘staple diet’ of Costa Ricans. I polish it off in no time and can feel my energy return with every forkful.

A small solar panel provides the power for four light bulbs, along with a few kitchen appliances in the wooden house that our host’s brother-in-law built for Freddy and Jensi.

There’s a small kitchen at the back with a log burning stove and a freshwater spring for drinking and showering – in fact, everything you need to remain self-sufficient. The radio used to be their only link to the outside world, but more recently they’ve been able to get a mobile phone reception. “Otherwise, it’s a four-hour hike to the nearest town,” she says.

Settling in for the evening, I ask my hosts whether loneliness becomes a problem in the jungle. Freddy says he wouldn’t change it but adds that, “every saddle begins to rub over time.”

“It can be dangerous in the jungle,” he says and his tone changes as he recalls being bitten by a Viper. He smiles and continues: “… and I nearly died.”

Fortunately, his son was there to help. You have just two hours to get to a hospital to get the anti-venom after a viper bite. Whether or not you will remain conscious throughout this period is another pressing concern.

I keep my eyes glued to the ground after hearing Freddy’s horror story, shots of adrenalin rushing through my body as my spine tingles with every rustle in the bushes. Eventually, I begin to relax as I gaze over the canopy. The setting sun ablaze on the horizon provides a welcome diversion from Freddy’s tales of creepy crawlies.

The next morning Freddy escorts Jose and I over the hills surrounding his lodge – he saddles up a pony to carry our bags and I fill my backpack with camera gear and provisions for the 10kms trek.

We follow a steep track, climbing at a furious gradient from the moment we leave the home-stay. Jose’s quick to remind me to drink water and take electrolytes as we trudge up the track coating our boots with thick red clay. The 80-90% humidity begins to take its toll on me as I take a breather.

I look at 57 year-old Freddy leading the pony with a small pearl of sweat showing through his shirt on his chest, then I turn to Jose who displays a bead of sweat in the middle of his T-shirt. With a wry smile, Jose shows me a photo he’d craftily just taken of me with every piece of my clothing sodden. Even my cap has been saturated to the point that there’s not just a drip coming from the peak – it’s as if the tap’s been left running!

I use a stop to take some photos as another excuse to catch my breath and we stumble upon a beautiful, almost translucent grasshopper sitting on a leaf. My exhaustion is a distant memory as I try to capture the colours in all their glory – the adrenalin and excitement putting a new spring in my step as we carry on.

Caminos de Osa helps arrange the tours in the Osa peninsula and has forged a path to not only protect their natural resources, but to include the local people, by creating tourism in the national reserves. By encouraging them to guide and offer accommodation for tourists who wish to immerse themselves in an authentic cultural experience, they have enabled and funded groups of local farmers, like Freddy and Jensi, and also ex-miners, to maximise tourism as an income stream. 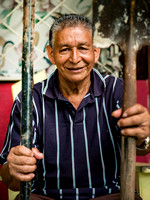